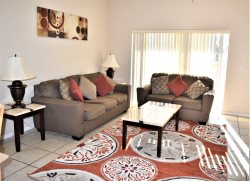 Oh What a Great Time!! Your Home was Amazing. Having the bedroom downstairs was Great for my Parents.We all Loved the Pool my mom got t...

First time to this resort and wont be the last! My mom & I planned this trip and wanted everything to be perfect..it was! The condo wa...

We booked with Anna about two months ago , for a week long stay . Anna & her team were quick to respond with emails & confirmation . ...

The annual average precipitation is 48.35 Inches. Summer months tend to be wetter than winter months. The wettest month of the year is June with an average rainfall of 7.35 Inches.

Jump to a Rental